Yesterday (17 June) I visited the Yuma East Wetlands from 0745-0900, before the heat had me panting (like the birds).  The marshes are in great shape and the willows and cottonwoods are growing steadily.  I’ll be updating my website soon with maps and better descriptions of this area.

An unexpected find yesterday morning was a BELL’S VIREO, which never stopped singing the entire time I was there.  Only heard one CLAPPER RAIL, and no Black Rails, but I did get there late in the morning.  The YELLOW-HEADED and RED-WINGED BLACKBIRDS were the most common and obvious birds.  A LEAST BITTERN teased me into trying to digiscope him (twice), but always moved out of sight at the last second!  I’ll get him sooner or later, though, for this year’s quest to photograph 350 birds.  One bit of bird behavior I haven’t seen before was from a LESSER NIGHTHAWK on a large area of fill dirt adjacent to the marsh.  As I was walking by it hovered off a short distance and continued to beat its wings in an erratic manner, almost like a Killdeer luring me away from its eggs.  I did not see any eggs or chicks, but didn’t spend but a second looking, in case they were out there frying in the sun. 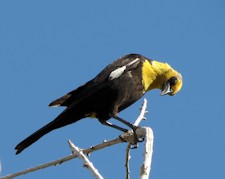 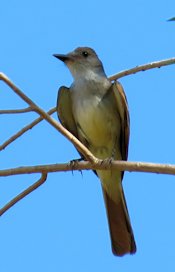