Visited the East Wetlands again on Thursday morning for about an hour prior to work.  Even though I arrived just after sunrise, I still heard no Black Rails.  Clapper Rails were calling, as was the single Bell’s Vireo.  New for this visit (in addition to what I had last Sunday) were four White-faced Ibis, a Greater Roadrunner, and numerous Great-tailed Grackles.  The Least Bittern was a no-show, but I did see a Mallard family with 9 nearly full-grown juveniles.  As I was walking over the rocks lining the levee road, I came close to stepping on a coiled and sleeping Western Diamondback! 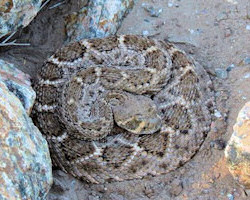 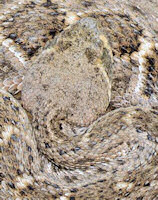 (Click on the Diamond-backed Rattlesnake for a full-sized photograph)

Close to work I drove by the Burrowing Owl colony along the salinity canal.  Three young owls watched me as I took some long-range photos with my super-zoom.  Then they got nervous and shuffled down into their burrow. Meanwhile, the parents kept a wary eye on me from atop the berm over their home.

(Click on the Burrowing Owls for a full-sized version)