Spent a few hours out birding in the Yuma area on Saturday morning (23 Jun), and then again a couple of hours today (24 Jun) with Mickey.  The days started out very pleasant, but by 9:00 the fun began to wane quickly.

On Saturday, at the Yuma East Wetlands, I added two more birds to the monthly list: GREEN HERON and BLACK-CROWNED NIGHT HERON.  In fact, I saw every expected wader in Yuma County except for Cattle Egret. And a sight I did not expect to see was a KILLDEER sitting in a small tree.  How common is that?!?  Along one of the channels hundreds of CLIFF SWALLOWS were feeding over the water and perched in the reeds.

Continuing east past the edge of the wetlands, I added a number of BLUE GROSBEAKS and HORNED LARKS on my way to Mittry Lake.  Just north of the burned-over site of Betty’s Kitchen, the Pratt Restoration Area is looking quite lush, and the trees are thriving.  I saw a female YELLOW WARBLER, numerous juvenile SONG SPARROWS, and heard lots of YELLOW-BREASTED CHATS.  My biggest surprise, though, was a YELLOW-BILLED CUCKOO that flew over and gave a series of calls once hidden in the cottonwood canopy.

On Mittry Lake were several CLARK’S GREBES and a RUDDY DUCK, and north of Mittry Lake in the marsh along S-24 I finally got my only BLACK RAIL for the day.  A juvenile BROWN PELICAN was on the Arizona side of the Imperial Dam spillway, and at the Hidden Shores golf course were two VERMILION FLYCATCHERS.

Today, Mickey and I headed over to Imperial County, CA, to the Living Waters Ministry in Bard, and found two RED-SHOULDERED HAWKS.  Efforts to find any Indigo Buntings were fruitless, but we did see a number of beautiful BLUE GROSBEAKS.  In the Colorado River channel south of the Imperial Dam, we had a summering RING-NECKED DUCK.

On the way back to Yuma, along the Mittry Lake gravel road, a CLAPPER RAIL dashed in front of the car.  We thought it would be long gone by the time we got even with it… But no, it didn’t want to go crashing through the salt cedar roots, so it flew up into a small tree and landed there–long enough even for a few photos! 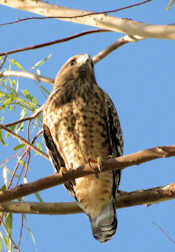 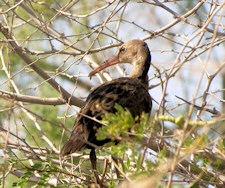