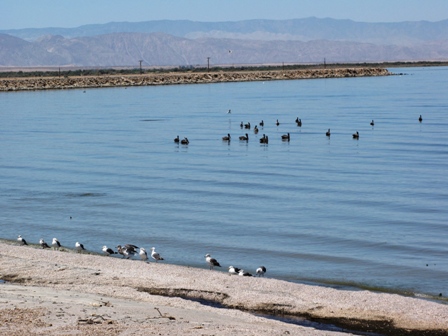 Blue-winged/Cinnamon Teal  2
male and female together @ Bowles Road. w/ CITE. Male was obvious with face pattern and this female stayed near it and seperate from the 3 CITE while in flight several times in about 30 minutes.

White-winged Scoter  1
along seawall north of Young Road about 11am. Seen again 20 minutes later still swimming north near the large dead tree at the geothermal plant on Lack Road.

Ruddy Duck  6
(1) along seawall at Young Road. (5) in pond at Calipatria State Prison.

Pied-billed Grebe  25
Very numerous on Finney and Ramer Lakes and a few in scattered locations.

Osprey  2
Both near Lack and Lindsey

Whimbrel  1
In flooded are on north side of Bowles Road

Long-billed Curlew  3
(2) in flooded area on north side of Bowles Road, (1) between Garst and Davis on Schrimpf Road.

Western Sandpiper  5
(5) together at west end of Bowles Road

Least Sandpiper  7
(7) together at west end of Bowles Road

Curlew Sandpiper  1
With Black-bellied Plover at the west end of Bowles Road. Documentation being sent. No photograph. White rump and back seen well in flight. Not in breeding plumage. Possible immature.

Western Gull  3
(3) together with small group of YFGU for comparison along sea between Young and Lindsey. Immature was first year with dark front.

Black Skimmer  1
Sitting on bank of pond at Calipatria State Prison. Back feathers very disheveled and bird did not look well.

White-winged Dove  300
Numerous pairs still in breeding type locations and several large flocks in countryside as if gathering to move on.

Mourning Dove  200
Numerous pairs still in breeding type loacations and several large flocks in countryside as if gathering to move on.