Just a chance to catch up with loads of pictures and stories from adventures past that we never had the chance to share.

This little trip into the time machine goes back to a fine day of birding at Unit One of the Sonny Bono Salton Sea National Wildlife Refuge (SBSSNWR) located north of Bannister Road on Vendel Road. 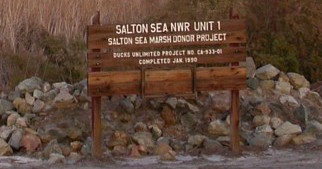 The best season for birding Unit One is in the winter when mass quantities of waterfowl, Snow and Ross’s Geese and several hundred Sandhill Crane are at their “south for the winter.” Parking on Vendel Road, between the first two ponds before sunrise, can produce some breathtaking sights as it did this day following a full moon. 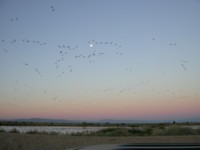 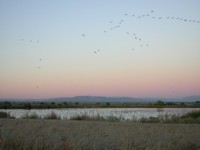 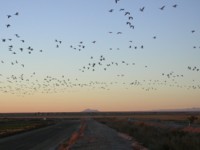 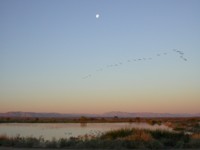 The above pictures are looking west toward the Peninsular Ranges with the third looking due south toward El Centinela or Mount Signal. Just the toe of Mount Signal reaches into the United States from Mexico and it is a good point of reference from anywhere in the valley if you ever get your ups and downs mixed up!

There are typically three areas in the Imperial Valley where the “white” geese gather. Unit One and refuge headquarters of the SBSSNWR at Sinclair and Gentry Roads and the third is the Wister Unit of the Imperial Wildflife Area on Davis Road at Hwy 111 near Niland. Unit One typically has a high percentage of Ross’s with the Snow Geese and for the past few years we have been seeing a few “Blue” Ross’s there which is quite rare. (Not pictured here!) 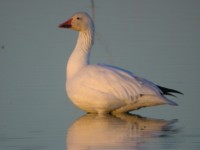 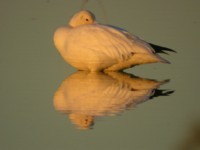 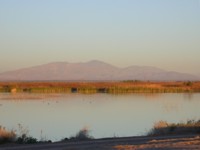 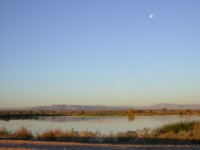 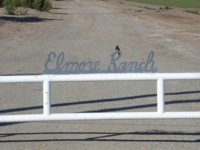 This Black Phoebe sitting on one of the Elmore Ranch gates made for a nice photo as we left Unit One to bird other locations. We returned to Unit One for an equally impressive sunset in good company. 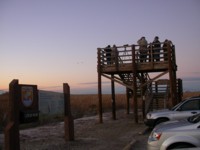 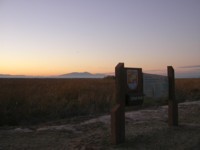 An interesting sight worth staying a bit late for at Unit One is the mass quantities of waterfowl that take to the air. What looks like swarms of mosquitoes swarming above this birders cap are mostly Northern Pintail filling the sky! The trick to witnessing this spectacle is to stay till you are just about sure it is too dark to see any more birds! 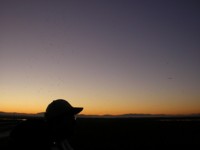