Spent Thursday, October 18 birding the Imperial Valley and the Salton Sea with Jonathon from Washington and had a great day. It was on the warm side of 95 and the hummidity was through the roof but light breezes and a bit of AC in our air conditioned self propeled bird blind made up for that. We had 113 species of birds for the day with a few “rare bird alerts” in the mix.

We started out in Brawley and had several of the sought after sothwest specialties like GILA WOODPECKER, and COMMON GROUND-DOVE.

A singing HOUSE WREN was at Carter and Fites west of Brawley as well as about 100 TURKEY VULTURE at roost. Some of them were taking flight while we were there. 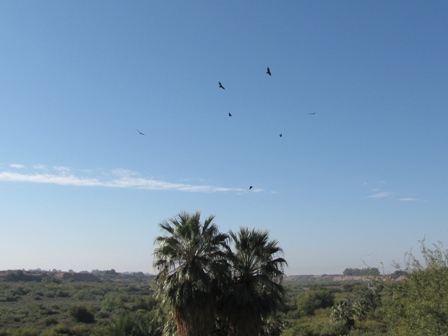 We then made our way up toward the Salton Sea. This old trap wagon and truck are along Loveland Road and the sign stenciled on the side of the trap wagon “OUT OF SERVICE” is most appropriate! 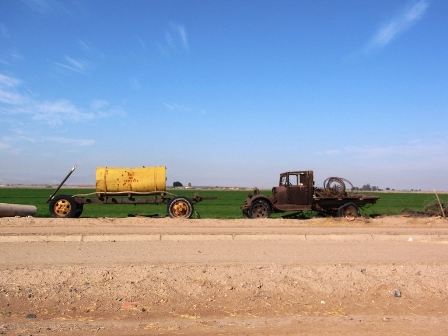 I contacted Al Kalin to see if the Ferruginous Hawk had been seen and he said no but that he had seen two PARASITIC JAEGER on Poe Road that morning so off we went. They are a pelagic species meaning that they live out over the ocean and there are typically only a few seen on the Salton Sea in any given year and are most often young birds. We were able to find one of them and it was indeed a young bird. Jaegers earn a living by harassing other birds in mid air and forcing them to either give up their fish catch or cough up whatever fish they already ate and this bird was actively chasing CASPIAN TERNS. A real arial flight demonstration by all involved! They were too far out for any camera that I own.

As we neared the north end of Poe Road we found a “Harlan’s” RED-TAILED HAWK and this is probably the same bird that spent the winter in that area last year. Harlan’s is a subspecies of Red-tailed Hawk that is almost black with very dark tail that is almost white below and is not seen very often here in the Imperial Valley. The picture below is an extreme crop and quite blurry but you can get a fell for how different it is from our typical Red-tailed Hawks. 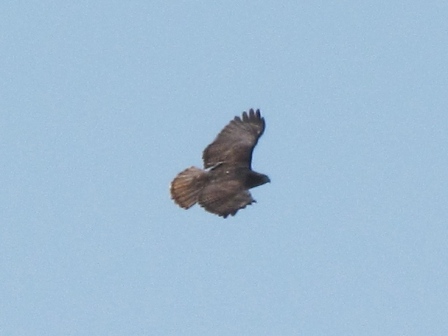 Many years ago there was a boat launch and marina at the north end of Poe Road but the Salton Sea rose up over it and is now receding so it is a very surrealistic location. The name somehow seems appropriate. If you visit there just be very mindfull to keep your vehicle in the same tracks as whoever went successfully before you and watch your step if you are on foot as the ground is not as dry as it looks. Here Jon is scoping for birds and the New River delta can be seen several miles across the bay. 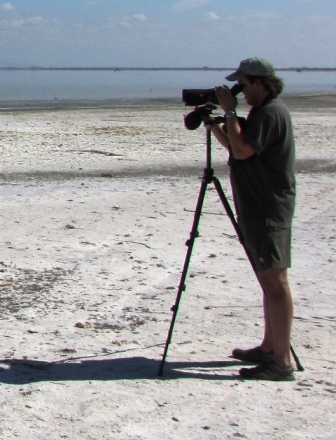 At the west end of Bowles Road we found a continuing female RUFF that had been reported a few days earlier but it was still a great find by Jon who was not aware there was even one around!! It was way too far out to get pictures of though but they are very striking shorebirds with bright orange legs.

YELLOW-FOOTED GULL is the most sought after species of bird here at the Salton Sea because it occurs nowhere else in North America north of Mexico. They are post-breeding visitors meaning that a good number of them come up from Baja California after they breed and spend the late summer and early fall here. In a typical year there may be only one or two individuals that will stay all winter and today was one of those days when I thought we were not going to find that one or two. We were running out of places to look when we found this adult taking a nap on the barnacle beach on the northwest tip of Obsidian Butte! They look very similar to the Western Gulls that you see on the coast in San Diego except that they have bright yellow legs rather than bright pink legs. Western Gull are also rare on the Salton Sea. 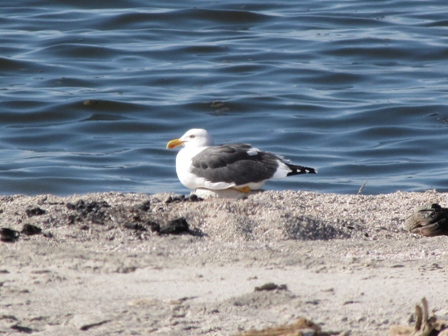 After grabbing some fine homemade sandwiches at United Food Center in Niland (highly recommended and they have the coolest wine selection in the valley!) we headed back south. A huge flock of blackbirds were streaming out to the corner of Pound and Blair Roads to take a bath in a newly irrigated field. The huge mixed flock contained mostly RED-WINGED BLACKBIRD but there were numerous others in the mix. BROWN-HEADED COWBIRD, EUROPEAN STARLING, BREWER’S BLACKBIRD and YELLOW-HEADED BLACKBIRD. One of the Yellow-headed Blackbirds is visible in this cropped thunbnail below. See if you can find it  in the larger image after you click on the thumbnail!! 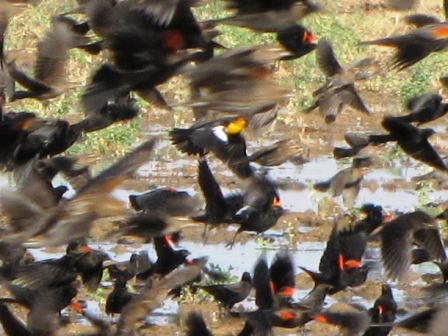 All of the birds in the next picture are Red-winged Blackbirds and most of them are female or immature birds. The bird in front is an adult female. 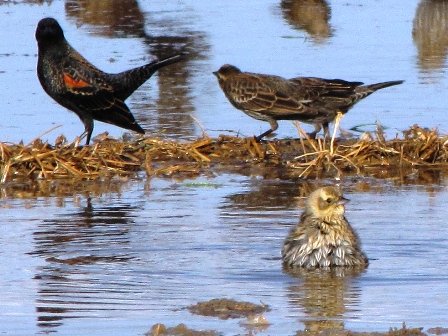 We made a stop at Young Reservoir at Kershaw and Albright Roads south of Calipatria. Although it is not open to the public it is always worth stopping at the gate and scanning through the fence because it has a reputation for holding waterfowl that can sometimes be tough to find. On this day we had a small flocks of REDHEAD that we had not encountered throughout the day. 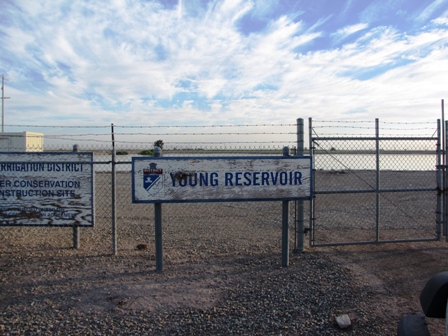 There is a small population of INCA DOVE that reside at the residences on Smith Road near the entrance to Finney Lake and it is a reliable spot when you have not seen them elsewhere for the day! Inca Dove are small like the Common Ground-Dove but they have a long thin tail, no spots on the wings and appear to be covered in fish scales. 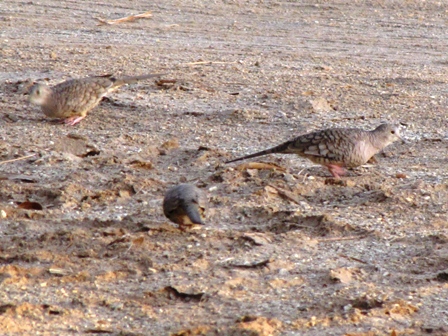 Our last birding stop for the day was on Finney Lake where we got to hear and then see a LEAST BITTERN fly across the lake. The spectacular sunset just kept getting better my the minute! The birds in flight in the next picture are DOUBLE-CRESTED CORMORANTS. 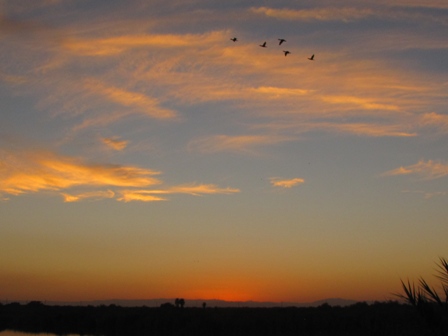 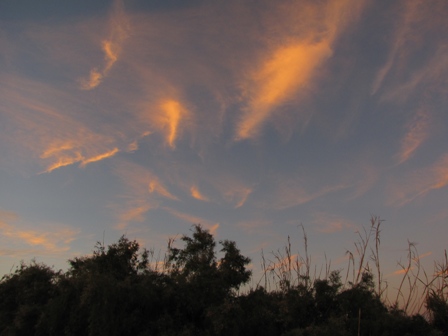 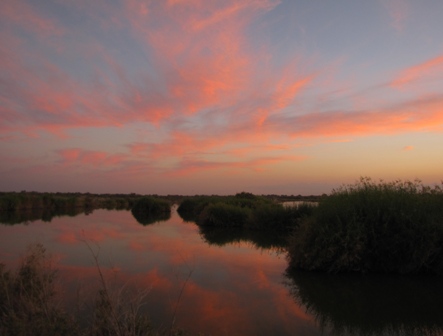 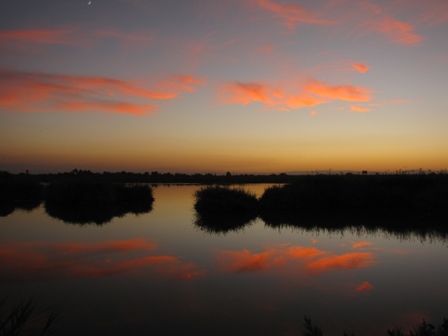 Jon had to get an early start the next morning to meet Henry in Yuma for two more days of fun in Arizona on the Colorado River and near Phoenix so we picked up some great Mexican food to go from Nana Dora’s in Brawley where we went over our bird list and then I dropped him off at Brawley Inn to end our day of fun.