Alamo River Wetlands Project. Click on thumnails for larger images. 35 species of bird and five species of odonates were seen in about four hours. Bird, dragon and damsels seen are listed at bottom of page!

Saltcedar (Tamarix spp.) was under siege at the Alamo River Wetlands Projetct, Shank Road site, this past Saturday as about 25 “pullers” attacked the non-native invasive species with their bare… or gloved hands! Pullers in attendance were from all over of the Imperial Valley and all had fun.

First stop of the morning for me was Johnny’s Burritos in Brawley for my machaca with eggs fix. A large raptor silhouetted in top of a big eucalytus tree caught my eye. North 7th and D Street in the middle of Brawley is NOT where you would expect to find a PEREGRINE FALCON but there it was bathed in beautiful smorning sunlight. Peregrine Falcon are one of the fastest birds in the world and they dine on other birds which they catch out of the air while in flight. Apparently it has caught on to the fact that Brawley has an over abundance of Rock Pigeons. 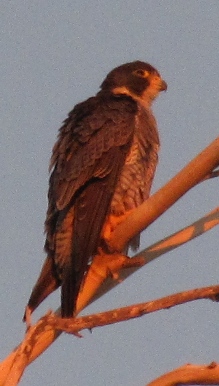 Following are several pictures of the wetlands and pullers hard at play! All were rewarded with a fine selection of fruit and prizes were awarded for “Best Bouquet”, “Most Pulled” and several other silly catagories. Some fine silly bird jokes were told as well. 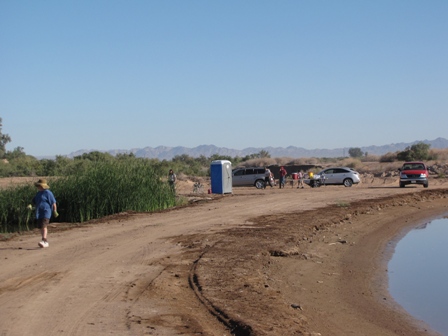 The next two pictures are a before and after with phragmites remaining and the saltcedar removed. 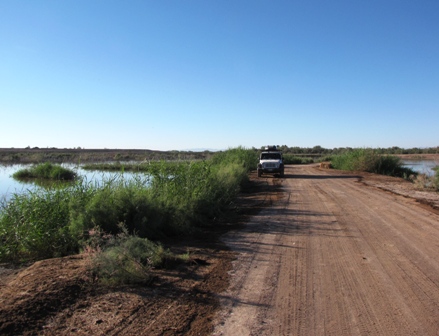 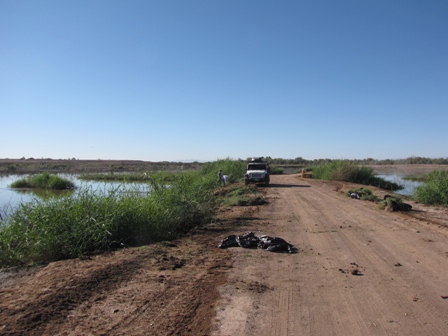 Aside from the huge flock of the vegetation eating American Coot that are regulars, there are a large number of Double-crested Cormorant  hanging out at the wetlands because their are a lot of small fish for them to eat. Double-crested Cormorant lack oils in their feathers which allows them to practically fly underwater to catch fish but it means they must frequently come out of the water to dry their feathers. That is why you often see them perched with their wings spread wide to dry. This photo is of an immature bird. Adults are black and the “double-crest” only occurs on adults for a very short time during breeding season. They nest is several places here in Imperial Valley like Ramer Lake and Mullet Islnad on the Salton Sea.

Another fish eating bird present was Forster’s Tern. They catch fish by diving headfirst into the water like a kingfisher. 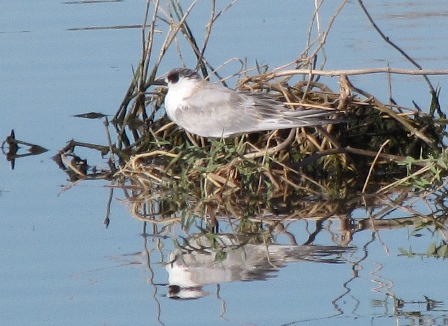 This Forster’s Tern was diving headfirst and catching minnows at waters edge right in front of us! 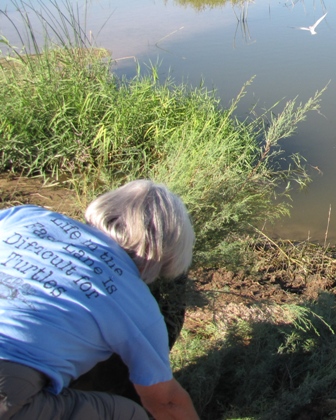 This report was generated automatically by eBird v3 (http://ebird.org/)