Friday night Nov 16th, I camped out on Obsidian Butte on the shore of the Salton Sea. Was hoping to see a great Leonid meteor shower. Bust. Saw maybe 20 all night long. Two were pretty nice and most of the others were so fast you were left wondering if you really saw that! The majority of them happened between three and five am. Temperature was nice but a breeze about midnight had me wraping up a bit. Most interesting event all night was the bird activity! White geese (Ross’ and Snow Geese) were moving around all night and it sounded like a good number of them might have sat down on the sea but I do not ever recall them sitting on the sea before. The geothermal plants are pretty loud so a lot of sounds were missed but when a flock of about 40 American White Pelicans came streaming over about 50 feet above from behind me it startled me pretty good! Lying flat on your back and suddenly there are these huge white ghosts over your head to go with the ghostly sound.

I set up my camera on a tripod and caught no meteors but did catch an aircrafts blinking red light trailing off to the north. 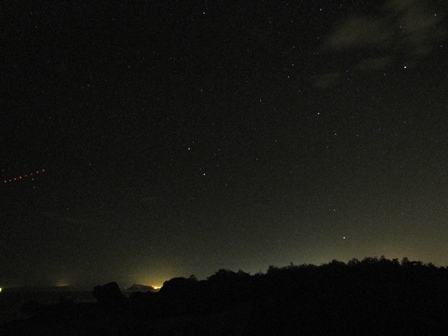 To fill the time waiting for meteors I began playing with the camera by running around in front of it with a little red LED headlamp. Writing my name in lights turned out pretty good! Yes, the image is flipped…still have to learn to write my name backwards! 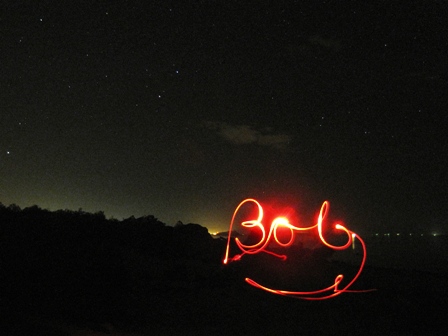 Just before sunrise I drove out to the Morton Bay Mudpots near Mullet Island. I was able to get some pretty interesting videos of the mudpots and have posted them on YouTube. The following links will open my YouTube channel or my Google Maps page with directions for the mudpots in a new window.

I can not empasize enough that you need to stay on the proven track of the vehicles who have gone before you. Getting off even a little bit can take a big chunk of time out of your day…and your wallet!! The first picture below is where someone spent a good part of their day digging just by getting a little off the track. The second picture is the perfect example of no track at all…that vehicle has been burried to the axles there for over a week!!! 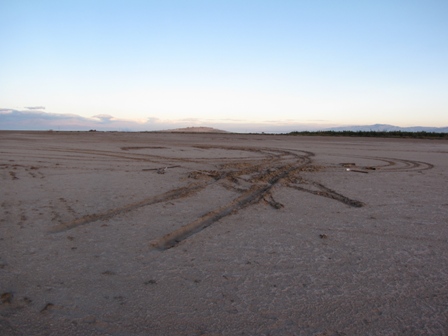 A little off the track will get you stuck. 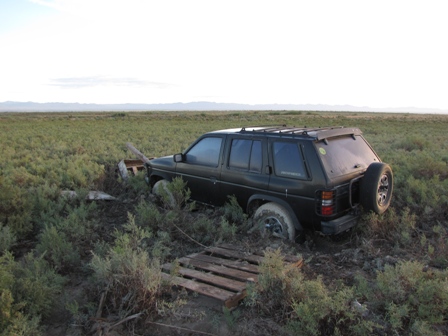 No track at all will get you burried for good! 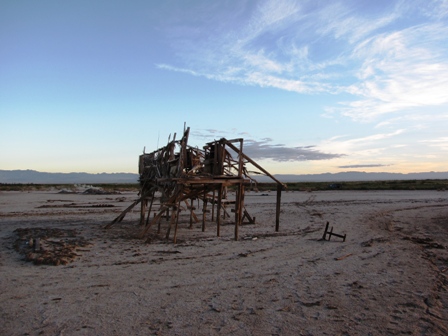 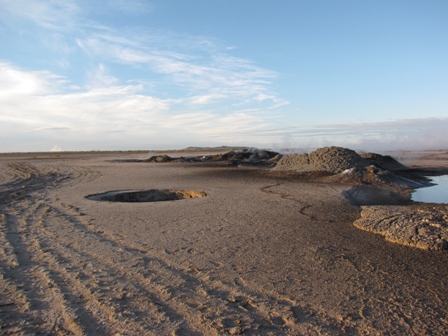 Would you drive here? 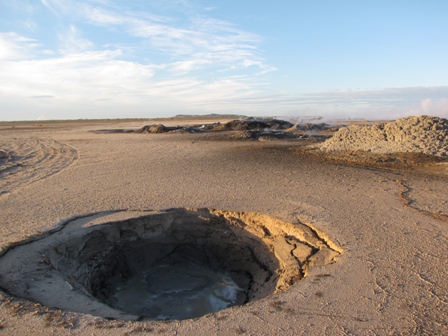 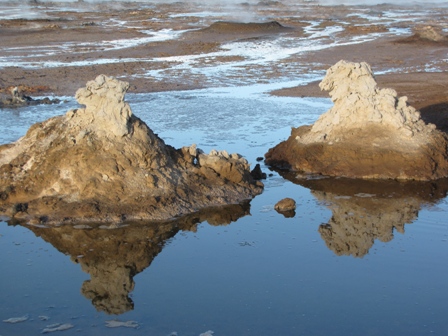 Larger gryphons that are no longer active. 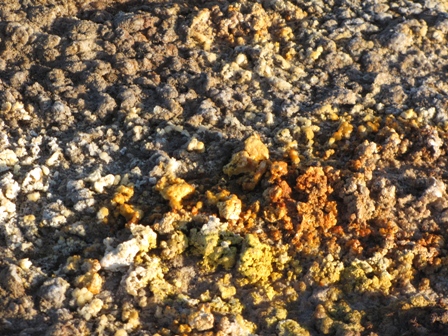 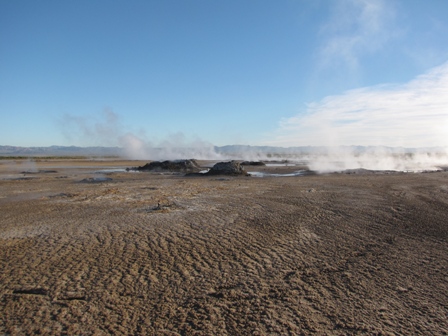 Some areas you do not even walk in! 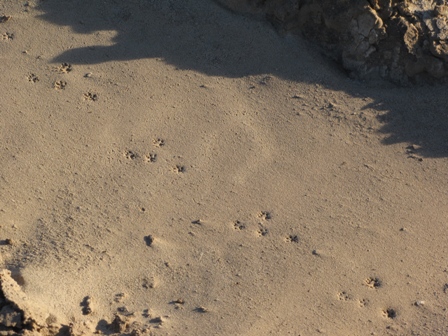 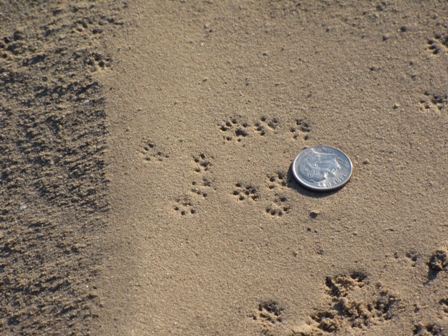 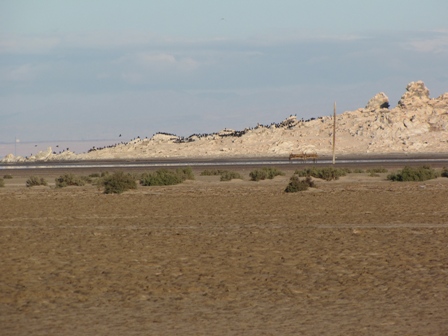 The Salton Sink has filled up and dried up countless times throughout history. It was a completely full freshwater lake some 400 or so years ago. The Colorado River delta has always diverted back and forth between the Gulf of California and the Salton Sink and it was on the verge of coming back to the Salton Sink when we gave it a convenient path and the flood of 1905 took advantage of it. Very soon after the population of Mullet fish in the Salton Sea were enough to have an operating fish cannery on this island and that is where the name Mullet Island comes from. The sea just as quickly became too saline to support freshwater Mullet or the cannery so it closed. A fellow named Captain Davis bought the buildings and made a restaurant and bar on the island and it was called Hell’s Kitchen. The foundations of those building are still standing on the right side of the island in the picture below. There is a postcard in the Postcard History Series book “THE SALTON SEA” by Karl Anderson. That postcard, pictured on page 67, shows these same mudpots, from this same vantage point, with the buildings still standing in the 1920’s!! The postcard on page 59 is a picture of Hell’s Kitchen in that book.

So these mudpots have been here for a long time and are not “new” volcanic activity. 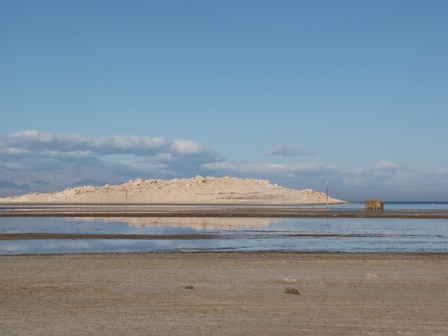 The freshwater of Morton Bay flows into the Salton Sea near Mullet Island and that channel is the reason you can drive no farther north along this portion of the Salton Sea. It also forms great shorebird habitat! 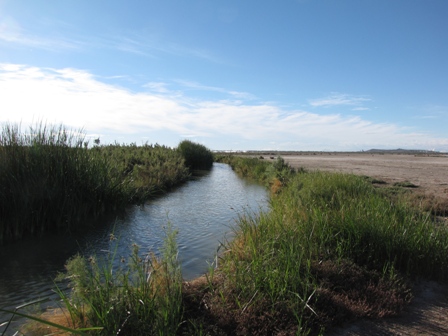 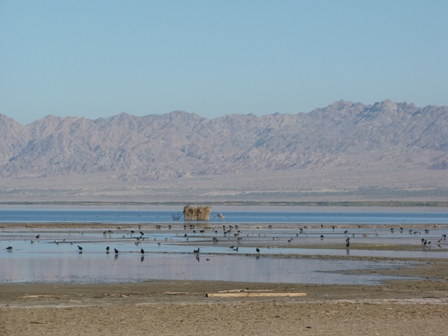 Great shorebird habitat. The Chocolate Mountains are about 15 miles to the north. 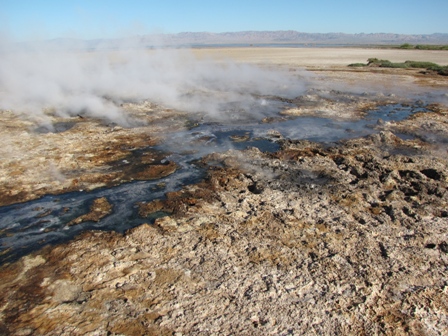 A smaller set of lone mudpots about 1/4 mile north of the main patch.

I spent several hours kicking around out there and then headed east into the agland in search of Mountain Plover. Found none though. There was a report of a Red-throated Loon, VERY rare to be in our area, on Young Reservoir south of Calipatria at Albright and Kershaw Roads so I made a stop there. Sure enough it was still there and I was able to get this documentation photo of it swimming with a Western Grebe. 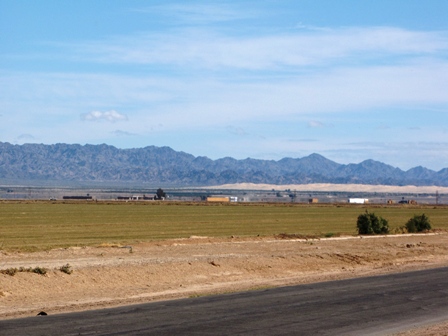 Looking NE to the north end of the Algodones Dunes. 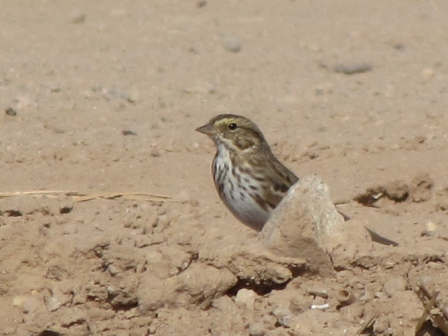 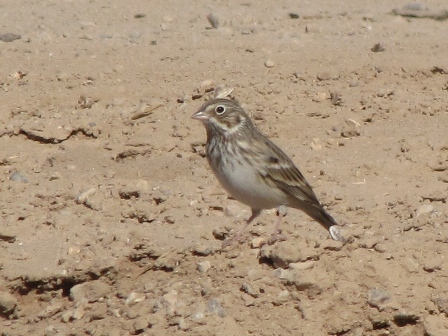 On the way home to Brawley I made a pass through the Alamo River Wetlands Shank Road site where there were about 50 American White Pelican and as many Double-crested Cormorants. Very few damsels and dragons still about this late in the season but there were still a few Roseate Skimmer, Familiar Bluet and Rambur’s Forktail.

A map and directions are at this link. Shank Road Wetlands 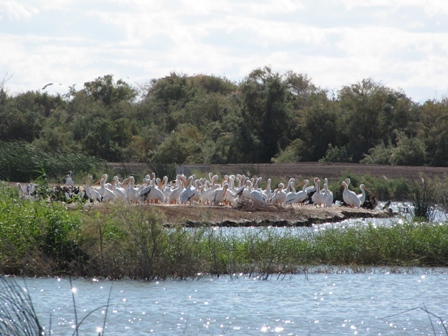 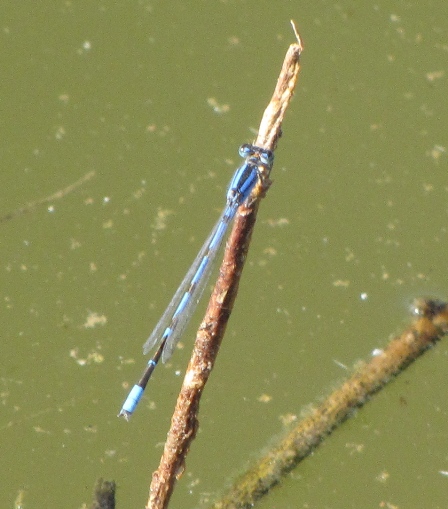 Last stop before home in Brawley was Alamorio Store, on Hwy 78 at the Alamo River curve, a few miles east of Brawley. It is a small and popular country store beer bar which offers a fantastic rib-eye steak dinner special with all of the trimmings every Monday night at 6pm. Part of the deal is you have to grill your own steak! The grill is plenty LARGE enough though.

View this checklist online at http://ebird.org/ebird/view/checklist?subID=S12122452

4 Responses to “Leonids and Mudpots”