I picked up Viviane and Dave at Brawley Inn at 6:30am and we hustled out to Dogwood Road, just north of Keystone Road, for a special event. The first “cloud” was crossing over Dogwood Road as we arrived and it just got crazier from there. 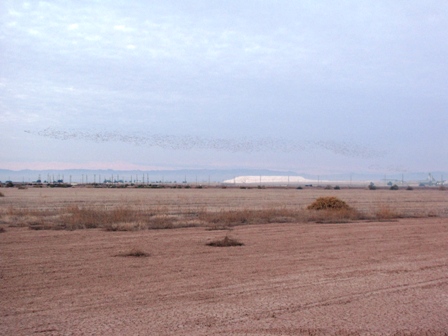 That low dark ”cloud” is all ducks! Holly Sugar in the distance. (Now Spreckles Sugar)

I first noticed this event about a week earlier. What looked like large flocks of Red-winged Blackbirds were actually ALL DUCKS!! There are well over 2,000 ducks in this picture alone and there were at least six or seven waves, some larger, that came over. They are moslty Northern Pintail with Northern Shoveler and American Wigeon mixed in. No doubt there are a few other species in there as well.

The ducks all start moving about 15 minutes before sunrise. 721 Sandhill Cranes came across going the opposite direction right at sunrise! Several thousands of Ring-billed Gull start to come up from the Keystone site and several thousands of White-faced Ibis come up from just SE of Harris and Dogwood at sunrise too. Mass quantities is an understatement! This event will probably unfold about the same every morning till about mid February.

If you would like to enjoy this spectacular event, you need to arrive at least 15 minutes before sunrise. Park WELL OFF the pavement, on the west side of Dogwood Road, 1/4 mile north of Keystone Road. (Dogwood Road is very busy.)

On the way back into Brawley we saw dirt clods moving across a barren field. Mountain Plover, aka Prairie Ghosts, are one of the most sought after species here in the Imperial Valley. Over 5,000, a significant portion of their 20,000 or so world poulation, spend the winter here. 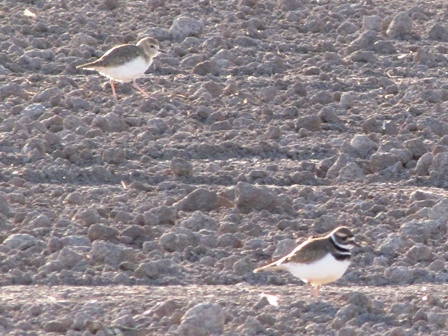 Residential Brawley turned up quite a few surprises this day. Dave spotted a large raptor in the big eucalyptus trees a block north of Main Street so we went around to the corner of Hawthorne Park near North 2nd ST and E ST where we had fine views of this immature Cooper’s Hawk. There was also a signing Cactus Wren and a Verdin nearby. 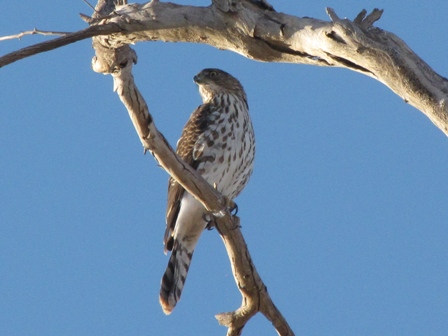 Every light standard at Meserve Park on K ST has a plastic Great Horned Owl on top of it and it just scares heck out of the Rock Pigeons…NOT. 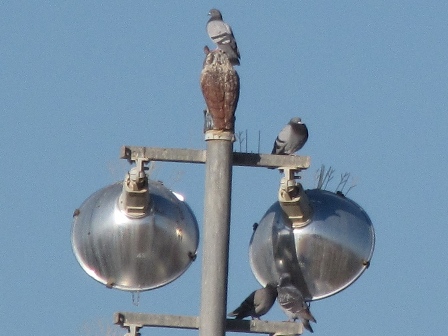 Near South 3rd and J ST we had 26 White-winged Dove with many Eurasian Collared-Dove. WWDO nest here in the spring but typically all leave so they were considered extremely rare in the Imperial Valley in the winter. Ask any dove hunter who wonders why they all disappear one week before September first every year. For the past few winters it has become common to find one or two but 26!? Could be they are expanding their winter range and they are already year round residents in Borrego Springs. 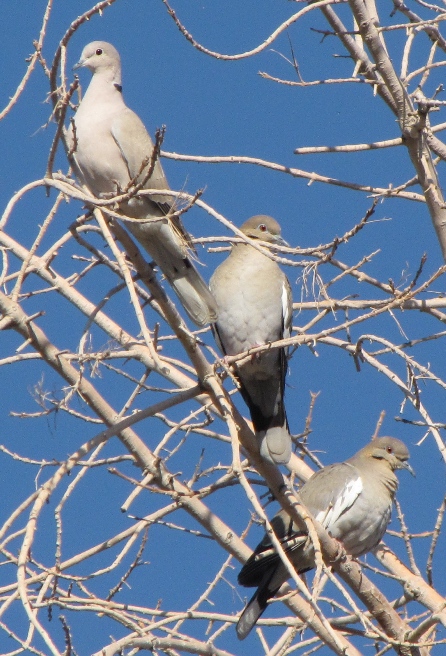 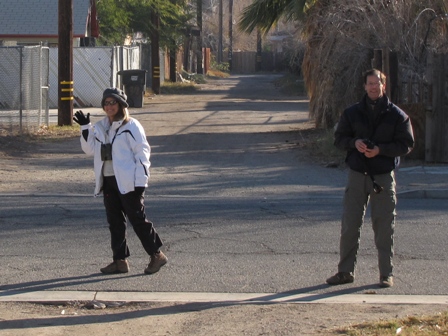 We then made our way up to the Salton Sea via Westmorland. This immature Red-tailed Hawk was most cooperative on Lack Road near the New River. 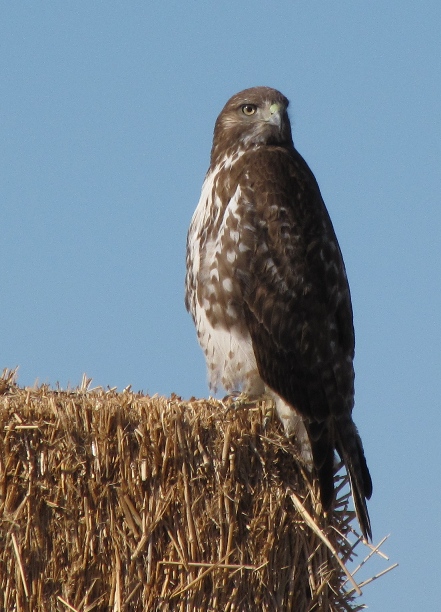 The hawk flew a bit ahead of us and landed in the same tree with the Loggerhead Shrike pictured below. Loggerhead Shrike is known as the “Butcher Bird” because they will capture their prey, small birds, lizards and insects, and impale them on a mesquite thorn, notch in a limb or barbed wire fence and come back to finish their meal later! 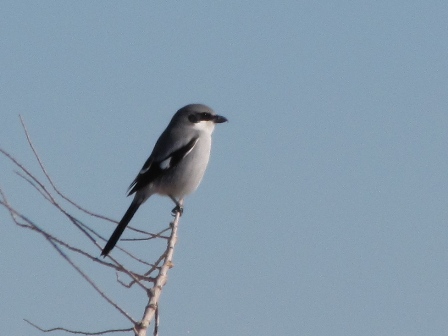 At the west end of West Bowles Road we had lots of shorebirds and there were several Snowy Plover there. This Marbled Godwit was resting along the seawall at Lack and Lindsey Roads. 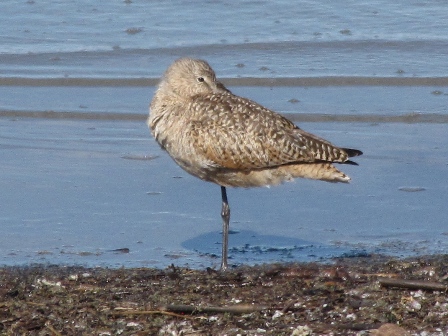 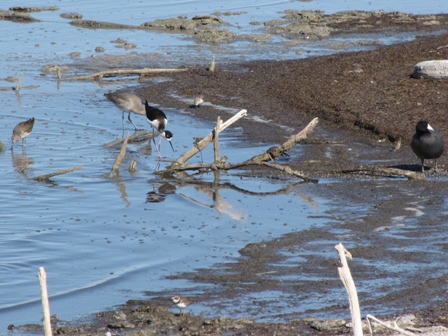 The Sonny Bono Salton Sea National Wildlife Refuge (SBSSNWR) visitor center was especially birdy this day. Lots of Gambel’s Quail, Abert’s Towhee, Common Ground-Dove and White-crowned Sparrows. Large numbers of Snow Geese were in the adjacent field at the view tower with a few Ross’s Geese in the mix. This group tends to have a higher number of Snow Goose and the group that hangs out at Unit One on Vendel Road tends to have a higher number of Ross’s Goose. The Barn Owl was not in it’s typical palm tree roost but the refuge volunteers who keep the office open on winter weekends (THANK YOU VERY MUCH) pointed out a Great Horned Owl in another palm, much to the delight of numerous visitors that morning! 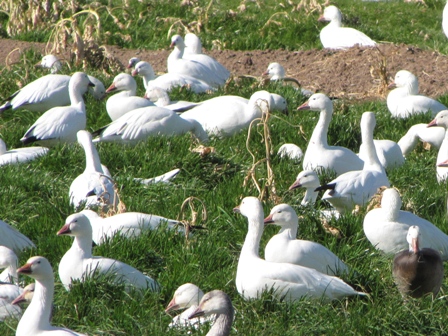 Garst Road north from Sinclair Road. The first half mile on the west side of the road is one of the best places in the valley for visiting birders to view Burrowing Owls. They are just far enough from the road that they do not flush and you can actually get better views of them by remaining IN your vehicle. My high count for that 1/2 mile stretch is 24!! I have never gone by that spot and not seen at least one bird. 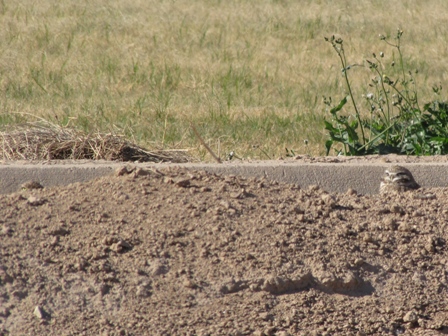 This dark morph Red-tailed Hawk has been wintering just south of Calipatria for fiive or six years now. 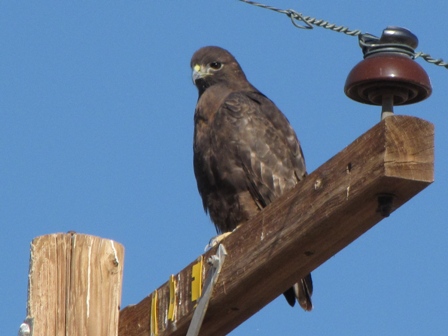 As we headed back to Brawley, we birded along the west side of the Alamo River, from Ruegger Road over to Hwy 111. This is part of the Imperial Wildlife Area that I cover for the Salton Sea Christmas Bird Count. We were able to find three Sage Sparrow that I could not turn up on the CBC! We also had Phainopepla and Black-tailed Gnatcatcher here. 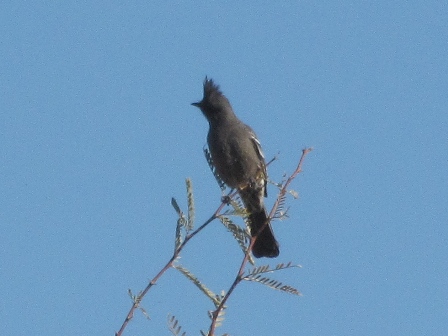 Here is my eBird report for the day:

View this checklist online at http://ebird.org/ebird/view/checklist?subID=S12610261