Video of the mass quantities of waterfowl, Mountain Plover feeding, and the mudpots can be viewed on my YouTube channel at this link. http://www.youtube.com/user/swbirder?feature=mhee

Many more photographs from this day can be viewed on my Flickr page HERE.

A map to the mudpots can be seen on Google Maps at this link. http://goo.gl/maps/RfrCN

Spent the weekend of Jan 19 and 20 exploring the Salton Sea and Imperial Valley with Sea and Sage Audubon Society from Orange County, CA. We met up at Brawley Inn bright and early and went straight to Unit One of the Sonny Bono Salton Sea National Wildlife Refuge (SBSSNWR) where we were treated to a spectacular sunrise and mass quantities of birds. 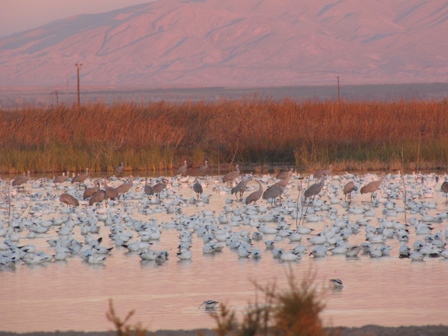 Sandhill Cranes, Snow and Ross’s Geese with American Avocet in the foreground.

An immature swan was reported at Unit One a week prior as a possible Tundra Swan which is the expected species to occur here at the Salton Sea. Turns out I was guilty of seeing what I expected to see and not what was really there. Immature swans are notoriuosly difficult to identify and we did not take the time to study this bird closely. Lesson learned!! It has now been determined that this bird is most likely an immature Trumpeter Swan which may well be the first record for Imperial County!! 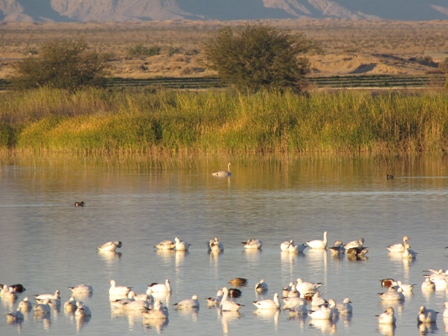 We then moved to the viewing platforms at the end of Vendel Road and saw three hooded Mergansers in the canal. While on the platform we were treated to a spectacular display as many white geese took flight from the field and landed very close in the pond at our feet! This was a great opportunity to study the differences between Ross’s and Snow Geese. 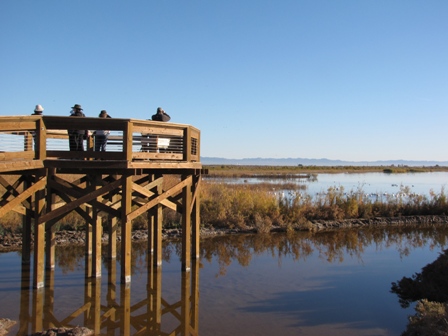 Viewing platform at SBSSNWR Unit One. 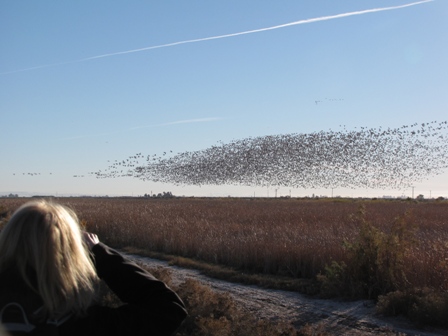 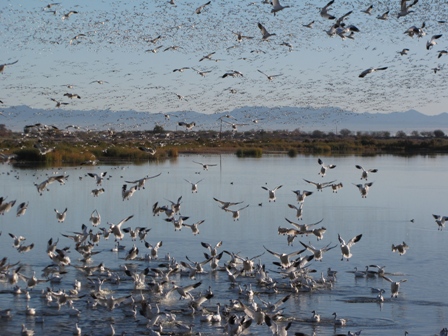 Geese at our feet. 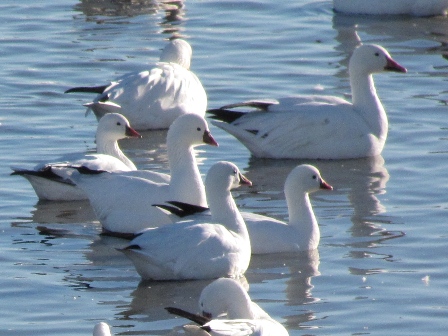 Several Ross’s with a Snow Goose.

We then made our way through the ag lands to the seawall along the Salton Sea. Along the way we had a Ferruginous Hawk flyby and several Burrowing Owls. This individual thought it was a bit too much attention and made a dive into it’s artificial den! 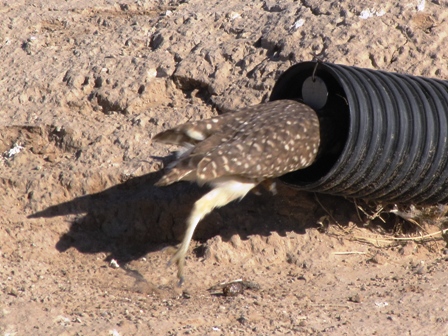 Along the seawall we found this Merlin which was our third species of falcon for the day. We only needed Prairie Falcon for the sweep! 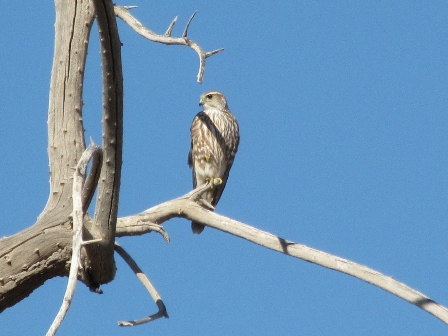 We had lunch at the SBSSNWR visitor center where we picked up many more birds like Great Horned Owl, Gambel’s Quail, Abert’s Towhee and Verdin. From there we crammed our carpools even tighter so that all were cozy in high clearance vehicles and took the track out to the mudpots near Mullet Island beyond Morton Bay and the Alamo River delta. Long strings of apparently new arrival American White Pelican and Brown Pelican were a treat as they had been scarce on the Salton Sea for most of the month. 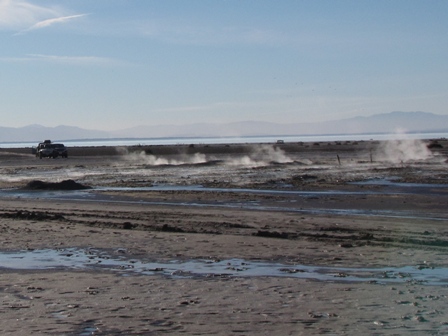 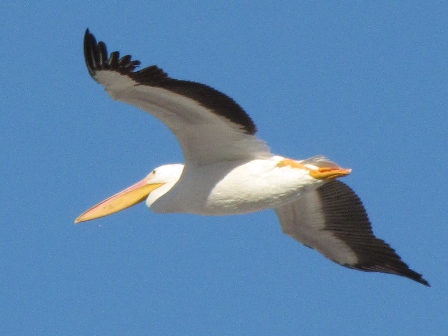 We ended our day in search of Sprague’s Pipit, the mouse in the grass, and were treated to fine looks at one of three individuals as the sun set on day one! 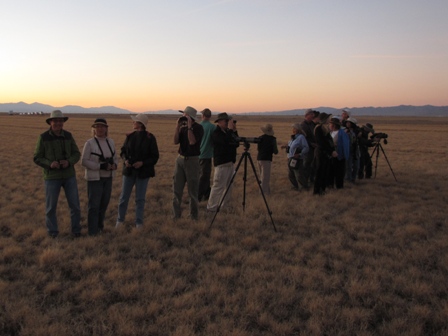 Sprague’s Pipiit viewers in an ocean of grass.

We left out very early again and this time we took in a special sunrise near Dogwood and Keystone Roads. A very interesting phenomenon that occurs on winter mornings here is when the cold temperatures create a mirage and things on the horizon appear to stretch out and levitate. This picture is looking due south at the Sierra de los Cucupah mountains, south of the Mexican border below Mexicali, as they appear to stretch out into large cliffs. The Cargo Muchacho Mountains and Black Mountain to our east even appeared to seperate and levetate!

The truly special phenomenon of the morning was watching tens of thousands of waterfowl, mostly Northern Pintail, streaming up from the ground and passing over ours heads as “clouds” of birds for most of an hour. Seven hundred plus Sandhill Cranes coming over in the opposite direction at the same time made for a magical moment!! 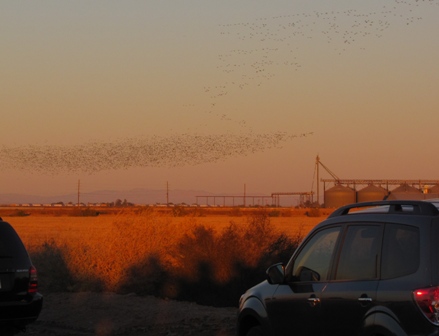 Our next stop was a field with several hundred Mountain Plover and Horned Larks at Schartz and Dogwood Roads. 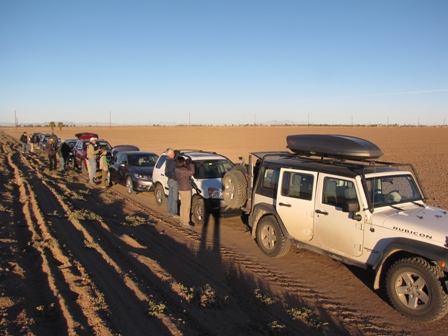 As we made our way back to the Salton Sea we all had great looks at this Prairie Falcon for a falcon sweep of the four expected species! This was along Brandt Road north of Eddins Road. 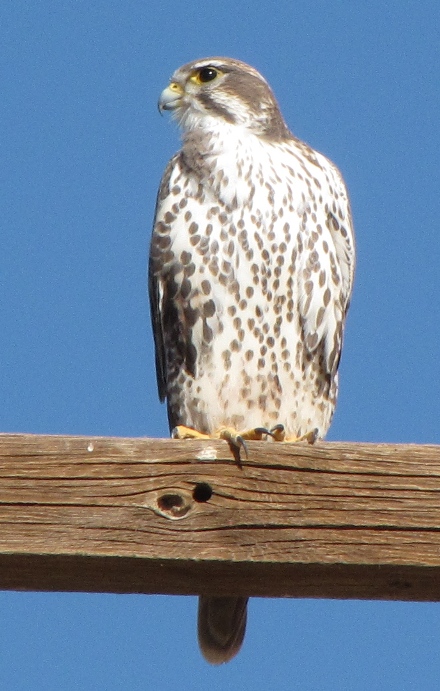 Our last stop for the day was back at the SBSSNWR visitor center where we made the hike out Rock Hill Trail in search of Yellow-footed Gull. We did not find our gull but did add Common Goldeneye to our trip list and had a great ending for the trip! 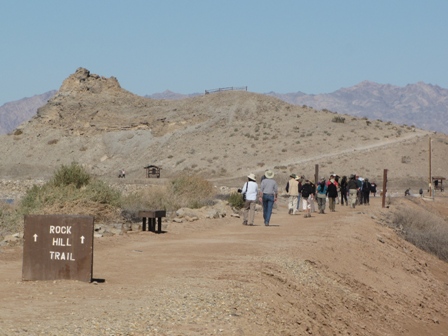 Below is our trip list of 112 species for the weekend. Thanks Bruce!

2 Responses to “Sea and Sage at Salton Sea”